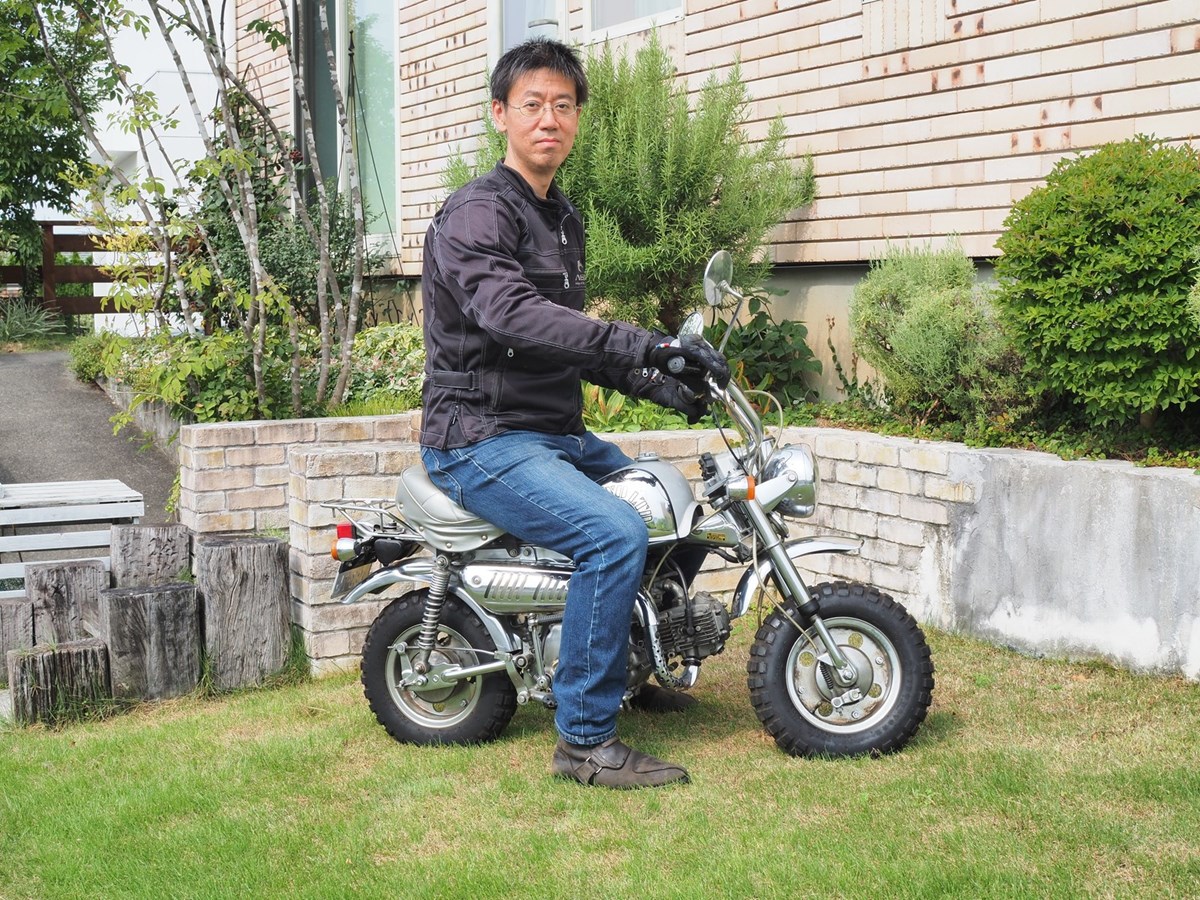 Dai Arai joined Honda in 1999 and has been a driving force behind Honda’s unique Dual Clutch Transmission for ten years.

This Q&A gives an insight into his background, his life in motorcycling and in Honda, and the challenges faced over a decade of developing DCT for bikes.

On ten years with DCT…

What is the origin of DCT?

Before my time at Honda, there were other automatic transmissions such as the ‘Hondamatic’ gearbox in the 1970s which relied on a torque converter, and the Human Friendly Transmission on the DN01.

So before the VFR1200F came with the first DCT, the idea of making an automatic transmission was around for many years.

The big difference with DCT is that it involves much less losses than the previous systems, so it gives a much more direct and sporty feeling.

What was the hardest problem to solve?

Everything on the development of the very first DCT for the VFR1200F was a real struggle.

No-one had ever done it before, so it was so difficult from both the hardware and software point of view. It was really the first time transmission engineers had been involved in electronic controls.

With the hardware, we had to develop a crankshaft case that could be used for both DCT and manual transmission engines, to allow us to prepare MT and DCT variants in the same frame. So we used two mainshafts with one inside the other to keep the package compact. Giving that small package the required strength and durability was a big challenge.

There was also the challenge of reducing the noise of the gear shift. Because the gear mechanism itself is the same as a manual bike, the DCT makes the exact same ‘pre-engagement’ noise from the gear dogs as on a manual shift. For some riders, hearing this shifting sound in automatic modes without the normal ‘manual’ inputs into a gear change could sound strange, so reducing that sound was a big extra challenge.

On the software side, programming the gear shift schedules for this new kind of technology was a real challenge. No-one had attempted to make such a system, and it takes thousands of hours to come up with the right programmes for the shift schedules.

What do you think had been the biggest single improvement throughout the decade of DCT?

It’s not possible to pinpoint one particular change as most important. That’s because the system has been evolved consistently over the decade, with different changes being introduced that not only improved DCT itself, but also made it bring out more and more the different riding characteristics required of each different model.

One of the first big steps was the automatic return to Automatic mode if you used the manual triggers as an override to select a gear. It’s a lot of programming to make the return to automatic as intuitive as possible, because you have to calculate the riding situation and therefore the rider’s intention – was it a downshift coming into a tight corner, a downshift to overtake on a straight road, etc. It’s not just a question of returning the system to Automatic after a certain number of seconds.

Later, we refined the way that the throttle ‘blip’s on the downshift to accurately match the revs and make those shifts really smooth. These changes involved a lot of synchronization with the PGM-FI fuel injection controls.

We also introduced the ‘Adaptive Clutch Capability Control’ which uses the electronic control of the DCT system to ‘slip’ the clutch a little when the throttle position is changed initially from a fully closed or fully opened position. That really helped smooth out the bike behaviour.

On the other hand, the ‘G’ switch introduced on the CRF1000L Africa Twin and later the X-ADV reduces the amount of clutch slip to give a more direct feeling for rear wheel traction. Especially off-road, this can allow riders to do controlled slides.

We’ve also linked the system with riding modes thanks to Throttle by Wire on the Gold Wing, which also helps to shorten the shifting time.

And on the latest CRF1100L Africa Twin, linking with the IMU really helps refine the gear shift timing through corners, as the IMU gives definitive information about lean angle.

So the system has developed continuously, and will continue to do so. That’s one of its great advantages – it can be continuously improved.

How would you personally describe the benefits of DCT?

The biggest thing for me is how much brain ‘bandwidth’ it frees up to use on what is most enjoyable about riding – cornering, looking for the right lines, timing your braking and acceleration.

The other things is that it is both easy and direct. ‘Easy’ meaning no need to use a clutch in slow traffic, no chance of stalling, no bashing helmets with a pillion. ‘Direct’ being the speed of the gear change, the ability to use the triggers, and, as I mentioned, to concentrate purely on your riding.

What would you like to see as the next application for DCT?

Personally, I’d love to see DCT on our Dakar Rally bike. That kind of riding – where fatigue is possible, and concentration so important – means the system has a big benefit.

Off-road, people are often surprised at how much DCT can help them – working a clutch lever standing up is not so easy, and uses up a lot of energy and concentration. Also, of course, with DCT the rider cannot stall in difficult situations.

How is control differentiated model by model?

Mainly, the different programmes for the shift timing. Each model is different. For example, the shift pattern on the X-ADV is much sportier than on the Integra, as it upshifts at higher rpm and downshifts also at higher rpm for more engine braking.

Every single DCT model is programmed with a different shift timing pattern to add character and taste in the riding feel.

What would your message be to riders who don’t think DCT is for them?

Please give it a try. It may take a short time to become used to it, but it really opens up new possibilities in your riding.

Arai-san’s life with Honda and motorcycles…

What was your ambition when you were young?

I wanted to be a Formula One mechanic. Formula One was really big in Japan when I was at high school, with drivers like Ayrton Senna and Satoru Nakajima massively popular and I thought it would be cool to be one of the mechanics in the pit lane.

What did you study?

I branched out into studying more about control software and human-to-machine communication – we made robots that did ‘kendo’ by remote control as part of our research (kendo = Japanese fencing). This involved designing parts of the robot and the control systems. This experience helped me once I got into Honda.

What is your biggest source of motivation?

I want to understand the language of machines… what are they telling us?

When I was young, I used to love taking things apart and putting them back together… I did all the maintenance work on my own bicycles, fixed CD players, and replaced parts on amplifiers to get the best sound possible. Even now, I have this personality where I can’t just ignore it if there is any problem or issue with a machine. When I’m riding, if there is any sound or feeling from a bike which makes me think there’s something wrong, I have to stop and try to figure out the root cause and how to fix it. I can never just ‘ride around a problem’.

What was the first bike you bought?

A CRM250R. It was the most powerful bike I could afford at the time, but I really wanted a VFR400R.

I had got my licence without telling my parents. When I told them ‘I’m buying a bike’, they said ‘What about getting a licence first?’. So I told them, ‘No problem. I already have one!’.

What are your current bikes?

Which bike do you wish you still owned and why?

My VTR1000F. My wife and I decided we had to sell one of our bikes, and my wife rides the Monster, so we decided to keep that one!

What is your dream bike?

I’d love to ride the 5 cylinder MotoGP bike – the RC211V. I’ve been lucky enough to ride a MotoGP bike when I was developing the quickshifter. And recently, I had an opportunity to ride a 1992 NR. That was amazing.

As I’m in charge of automatic transmission research, I’d also like to try the CB750 EARA Hondamatic and the Juno with the Badalini style transmission.

What is your greatest biking achievement?

One of the best touring rides I did was to the north of Japan two-up with my girlfriend at that time. I made a bespoke rear carrier for the CRM250R and put all our camping gear on it. At the time, you weren’t allowed a pillion on the highway, so it was backroads all the way for a four to five day trip. In the end the rear suspension started making a strange noise and broke!

Eventually, my girlfriend got her bike licence and became my wife. My greatest achievement through biking!

What sort of riding do you do in your spare time?

I commute on the Ducati Monster, and the two Honda’s for shopping.

What is your speciality – frame, engine, styling?

What projects have you worked on at Honda?

Most of the DCT bikes since the first VFR1200F. Work on the quickshifter for the Fireblade. And several ATV and Side-by-Side models.

If you could get the chance to design any type of bike regardless of cost or regulations, what would it be?

A kind of up-to-date CRM250R– over the years I’ve come to enjoy smaller bikes more and I would like something like the XR that I have but with more punch.

Who was the most influential person on your career and why?

Soichiro Honda. I was especially influenced by the book he wrote about his outlook on life. He seemed to have a character that would light up a room and brighten up people around him and I consciously try to be as cheerful as possible at work.

What is your favourite sport?

Athletics. 400 metres was my event.

What is your favourite country?

What is your favourite book?

What is your favourite film?

What is your favourite food?

Who was your biking hero?

Tadayuki Okada. He was a pioneer for Japanese riders in his day.

All the petrol in the world has run out. You have the last 10 litres in the world. What do you do?

Give it to someone else and work on creating a world that doesn’t rely on petrol.